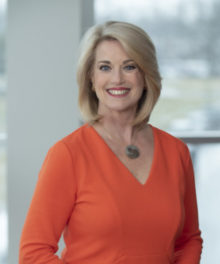 Jane Robelot, nationally acclaimed network news anchor and correspondent, joined WYFF News 4 in January 2007 as a contributing reporter and anchor of the news magazine Chronicle.  In 2017 she was named full-time co-anchor of WYFF News 4 at 4. Jane is the anchor of “Chronicle”, a quarterly prime time news magazine, she also hosts and produces the series “CommUNITY Conversation’ which focuses on diversity and inclusion in our community.

Jane graduated Clemson University with a B.A. in Economics and is an avid Tiger fan.   She is a very active alumnus, having served on the President’s Advisory Board, and a founding member of Board for the Center for the Visual Arts.